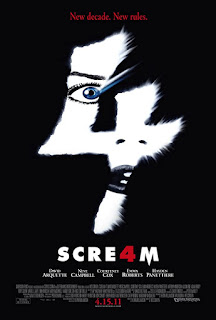 Genre: Horror, Mystery.
Released: 2011.
Director: Wes Craven.
Starring: Neve Campbell, Courteney Cox, David Arquette.
The protagonist of the story is a young woman named Sidney Prescott.
Sidney lives in relative peace and quiet for several years. For many months she had not received disturbing calls, no one tried to find out her favorite horror movie, no one put a knife to her throat. Fifteen years after the first Woodsboro massacre, Sydney decides to come to his hometown to take part in the events held here. Many residents of the town, who lost their children and loved ones many years ago, arrange a special farewell to the dead teenagers.
Sidney's longtime friends live here - a town sheriff named Dewey Riley and his wife, a former journalist Gale Weathers, who does not like the calm and quiet life of an ordinary housewife. Nothing seems to disturb the calm of the heroes. But right in the evening, when Sydney arrives, two high school students are found dead. Sydney realizes that all of her nightmares are back. She settles in the house of her aunt Kate and cousin Jill and, with bated breath, waits whose corpse will be found next. Her ghosts from the past did not doze off all these years, but waited for an opportunity to break free again. But now Sydney is completely unaware of whom she should expect a blow to the back.
‹
›
Home
View web version