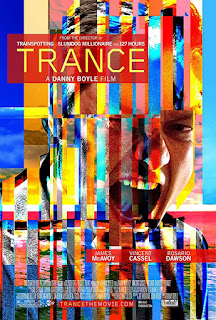 Genre: Crime, Drama, Mystery.
Released: 2013.
Director: Danny Boyle.
Starring: James McAvoy, Rosario Dawson, Vincent Cassel.
The protagonist of the movie is a young guy named Simon, who works in the famous auction house and makes sure that all the paintings after the auction returned to their rightful place in the safe.
Having worked here for a long time, a guy who does not bathe in luxury and money decides on a serious crime. He contacts the leaders of a well-known and rather dangerous gang and talks about how to easily and quickly turn a major robbery. The leader of the gang named Frank agrees to steal a picture of Goya, which costs more than five million pounds, carefully plans a plan with Simon and agrees in advance about Simon's share. But during the robbery, at the very last and decisive moment, Samyon hit someone hard on the head, he loses consciousness, and when he wakes up in the hospital, he cannot remember where the picture was going at the last moment of the robbery.
After a long treatment, Simon arrives home, but his memory still remains under a strong castle. He is kidnapped by the guys of Frank, who does not believe that Samyon has lost his memory. He more willingly believes in the version that Simon decides to hide from him the location of the picture and wants to take all the money for himself. Simon is being tortured, but it soon becomes clear that nothing can be gained from him.
‹
›
Home
View web version