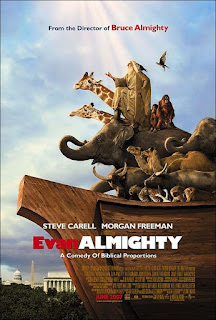 Genre: Comedy, Family, Fantasy.
Released: 2007.
Director: Tom Shadyac.
Starring: Steve Carell, Morgan Freeman, Lauren Graham.
The main character of the movie is a young man named Evan Baxter.
In the past, Evan's boss, cynical and indifferent to all the troubles in the world, Bruce, decided to arrange a rally for Evan. He made him talk different nonsense and complete nonsense right during the live broadcast, because of which Evan completely disgraced himself in front of his viewers. But since then a lot of time has passed. Not so long ago, Evan decided to quit his job and permanently leave television. This decision was not easy for Evan, however, strangely enough, after that his life dramatically and radically changed for the better. In a short period of time he became a congressman, began to engage in public affairs and charity.
However, the God has plans for Evan, which are much more important than his worldly affairs. Soon, God comes to Evan and tells him that, taking an example from the famous Noah, Evan will have to build a new ark in order to save all living beings on Earth. Of course, Evan does not pay attention to this warning, attributing everything to an inflamed imagination. But soon he notices that his hair began to grow ten times faster than usual, and all living creatures reach for him, like iron to a magnet. It seems that God's warning was not an empty phrase.
‹
›
Home
View web version