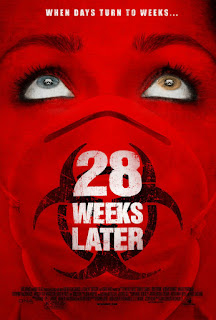 Genre: Drama, Horror, Sci-Fi.
Released: 2007.
Director: Juan Carlos Fresnadillo.
Starring: Jeremy Renner, Rose Byrne, Robert Carlyle.
The action takes place twenty-eight weeks after the events of the first movie.
For several weeks, the rage virus, so named because of the amazing speed of its spread, and also because of the monstrous consequences, destroyed almost the entire population of Great Britain. People infected with the virus died right on the streets, or became bloodthirsty and insensitive monsters. Infected people attacked the healthy, killed them or turned themselves into such monsters. However, a small group of surviving people were able to create something like a bunker and escaped from infected people there. Among these people is a young man named Don, who had to leave his wife Alice among the infected.
Soon after the spread of the virus, the United States armed forces as well as NATO troops arrived in Britain and marked the borders of the infected area. A green zone appeared in which all healthy people ended up. Among them is Don, as well as his children, who during the epidemic rested abroad. He tells them that their mother died in the infected area, but does not say that he had to leave her alive and well in the camp of infected people. But real hell is yet to come.
‹
›
Home
View web version